As of May 1, 2018, all of the lessees’ planes were relocated by the owners, so no aircraft are permanently housed at the airport now. The airport will solely operate for members of the public to land and take off until the close of business on May 15, 2018. The runway will be closed in accordance with Federal Aviation Administration requirements on May 16.

The airport has reached an agreement with UNC Hospital Air Care, allowing occasional helicopter parking and refueling at the airport over the next 12 months, while the hospital constructs some additional helipad facilities away from Chapel Hill. We expect that the final end of all airport operations will occur around May 15, 2019. The University has no near-term plans to construct buildings at the airport site. Likewise, there are currently no plans to sell the land.

Brad Ives, associate vice chancellor for campus enterprises, said the closing of the airport was needed because the University was losing money operating the airport. It also faced at least $1 million of runway repairs to keep the airport open. In short, Ives said, past reasons for keeping the airport open no longer justified the mounting expense.

UNC-Chapel Hill will be building a solar energy project with battery storage on land at the airport during the second half of this year. Additional information on that project will be available after the construction bidding process is complete. 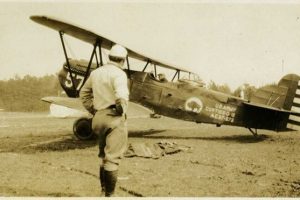 It sits empty now, but this long stretch of asphalt on the northern edge of Chapel Hill remains full of history. With its closing on May 15, Horace Williams Airport became part of history, too. The last plane based at the airport took off on May 1.
-University Gazette, May 2018